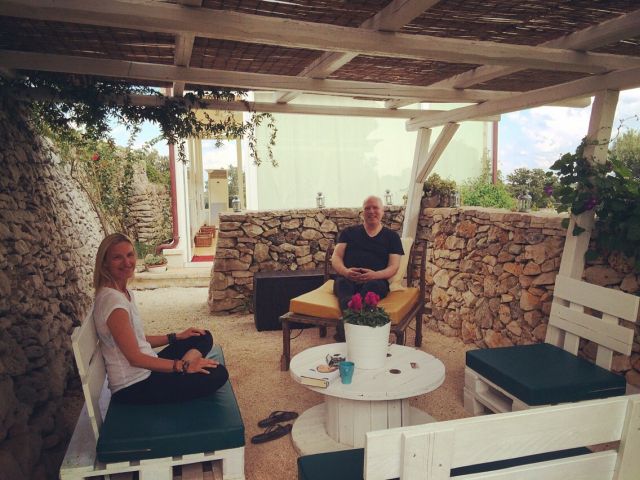 Max, what is Inner Axis? How would you describe it? Is it a new style of yoga or a system?

Inner Axis has been around for about ten years. I just did not name it. It took me a long time to give it a name, and I did that because I realized that as I travel a lot of people are being exposed to my teaching or are influenced by it. And I would not call it a new style of yoga, truly I don’t even call it yoga now. Inner Axis is mostly yoga based, but it also has qi-gong, movement therapy and ethical component as well.

Max Strom je autorem knih jako: A Life Worth Breathing a There Is No App For Happiness.
My aim is to unify people, so that people from different walks of life, different genders feel comfortable, from a housewife to a soldier, or a very religious person, an atheist, a Muslim. I received a letter from an Eastern orthodox priest thanking me for this work. And to me that was a great achievement to reach someone of the “cloth”. And also to go to Islamic countries, where I travel frequently and have people who are devoted Muslims thanking me for it and finding nothing offensive about that or nothing that’s not allowed.

So when someone takes an Inner Axis class, what shall she or he expect, and what can she or he not expect?

Good question. So first what to expect – if you looked through a window you would say “oh that’s a yoga class, I recognize most of it”, but we don’t teach one level, meaning this is how you do it. We will accommodate you at any level. We have several levels – 1, 2, 3, occasionally level 4. Level 1 is the most fundamental. So I teach the fundamental version to everyone and then some people have more capacity for any reason – they are more athletic, not injured, they didn’t just have a baby, or they are younger, etc. and those I give more advanced version. So we work from bottom up, not the top down, because that’s how the ego-mind works. If you start from the top down, the way many yoga teachers do, you are fighting the ego, because you are saying “this is what we are supposed to do” – that’s how the ego hears it and if you can’t do it you are a looser and I’ll help you. But if you say “this is what we do” and everyone can do it, everybody is happy. And then you quietly go and you give the more advanced variations to some people.

OK. Clear. Anything else what to expect?

You will repeat postures and movements multiple times rather than just doing it once. You are encouraged not to hurt yourself; you are not encouraged to work harder, because most people work too hard anyway, so you are actually encouraged to work more gently. And of course last but not least you are encouraged to breathe more than you ever breathed in your life, because it’s the breathing patterns that cause the nervous system to finally relax. So Inner Axis is known for helping people to overcome anxiety, depressions, sleep dysfunction, and that’s the main thing we target and you should feel better in ten minutes, not some day.

And what not to expect on the other hand?

There is no Sanskrit at all. So there is no chanting to Gods or any deities, or anything like that. We just use our mother tongue or the language of the area.

You describe Inner Axis as a breathing practice accompanied by movement and postures. So breathing is a very important element of your teaching. In many yoga classes the teachers tell you to breathe but rarely do they show you how to breathe or explain why. So I’m assuming your classes are different in this aspect?

Precisely. First of all we explain why. We have an epidemic of stress in our culture, as everyone knows now. Roughly in every industrial city we have 25% of the population medicating themselves for anxiety, depression or both. We have about the same number of people medicating themselves to go to sleep every night. So we have a huge problem and it’s vastly getting worse, not better. In fact the World Health Organization predicts that by 2020 the leading disability worldwide will be depression. So to me this is a way the Inner Axis can serve people. I hear from people regularly who say things like “I had panic attacks until starting this practice and now I don’t have panic attacks. I have not had a panic attack for a year now”. It’s not magic or superstition, it’s not anything like that. It’s just that when you do breathing patterns it affects your nervous system. Anxiety is a nervous system disorder. Depression is a nervous system disorder. And one of the things that we get to through breath work is we access suppressed emotions which we all have.

My last question is – you teach worldwide, you travel a lot to Middle East, China, Europe – Germany, England and so on, you speak at big conferences, so when will you come to Prague?

Rezervace workshopů Maxe Stroma na http://www.ommm.cz/akce/max-strom-praze/
And I am excited that I can finally come to one of the most beautiful cities in the world, or so I am told, as I have never been to the Czech Republic before. I am very honored and excited to come to Prague. Program Maxe Stroma v Praze 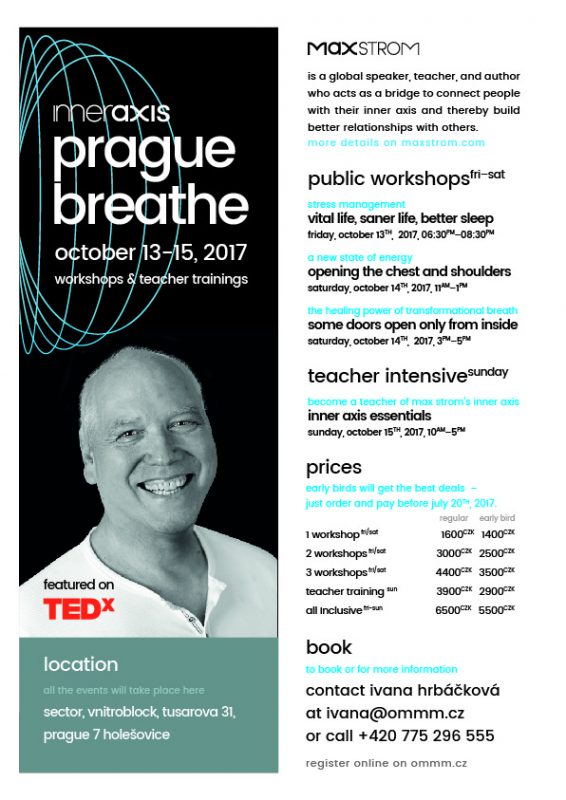